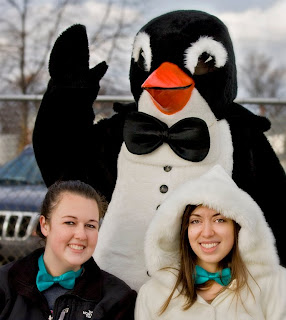 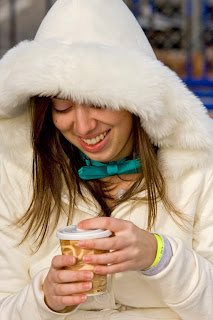 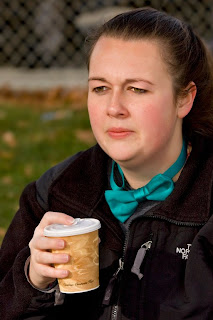 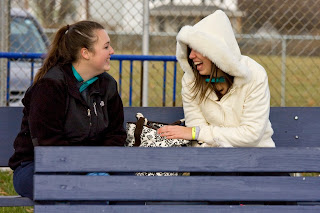 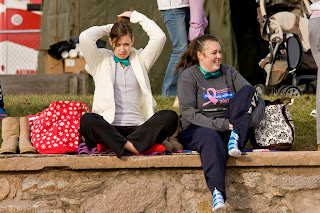 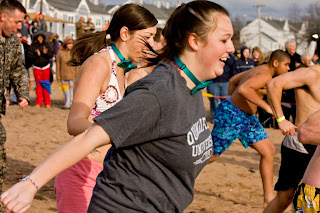 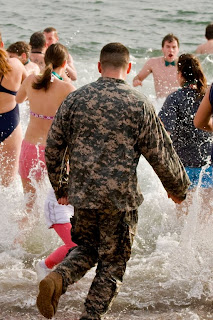 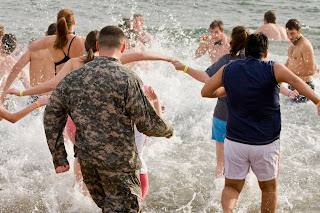 It was 39 degrees on Saturday in East Haven, but the wind made it feel even colder for those of us watching the shivering, bathing suit clothed penguin plungers at East Haven Town Beach (Cosey Beach Ave) in East Haven. The event started at 11am with music, a penguin mascot, breakfast pastries, and a barbecue. At 2:00 the National guard entered the 35 degree water, followed by teams and individuals moments later.Over one hundred people ran, jumped and even dove in the long island sound to raise money (almost $15,000) for the CT Special Olympics. The first plunge was in 1990 in Madison, Connecticut. There were only 30 plungers and we raised $5,000. Over the years, the Penguin Plunge has raised over $650,000 for SOCT.

The two Quinnipiac teams, the Quinnipiac Otters and Roots & Shoots, together raised over $1500 for the CT Special Olympics.
There are many other Connecticut penguin plunges scheduled for 2009.
And if you don't want to plunge...do an "Un-Plunge". Set a monetary goal you'd like to raise, and have people pledge you not to go in. If you reach your goal, you don't have to go in! If you don't reach your goal, then you go in!
Sign up for an upcoming plunge...http://soct.org/plunges/
Posted by Lisa and Tom Cuchara at 3:06 PM